Billed as a paddle to experience sea birds your intrepid paddlers were not disappointed! Although a few days earlier it had looked as if the wind might prevent the trip from going ahead, Sunday dawned dry and sunny with a gentle WSW breeze. 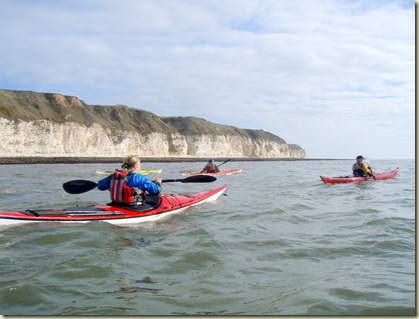 The plan was to leave South Landing with the last of the ebb, round Flamborough Head and then paddle on towards Bempton Cliffs one of the few mainland gannet colonies. Lunch was to be taken at North Landing by which time the flooding tide should have provided enough water to visit most of the caves and arches which riddle the area underneath the lighthouse. 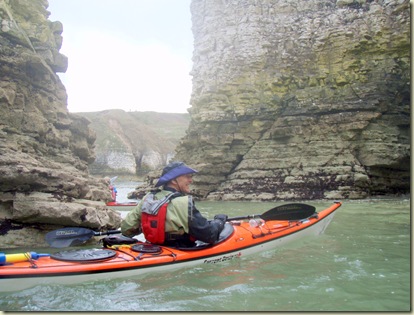 As we paddled around the headland we became aware of thousands upon thousands of guillemots and razorbills nesting precariously on the cliffs. As we paddled past we were sometimes exposed to a blizzard of birds flying down from the cliffs across the sea all around us and often at head height! The sky was sometimes almost obscured by the number of birds flying around – fantastic! 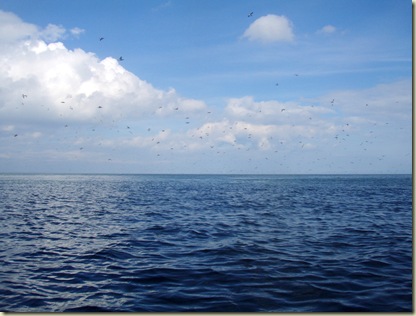 An endearing feature of guillemots is their choice of options when disturbed floating on the water – they might just suddenly dive, or take off only to land/crash a few hundred yards away, or more usually use their wings to carry out a very clumsy, but fast, ‘butterfly stroke’ half flying, half swimming on their bellies! 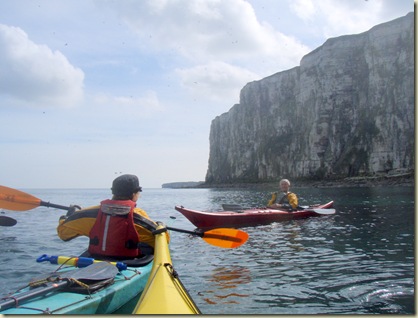 Richard saw his first puffin shortly afterwards and soon we had seen several with one particular individual keen to show him (her?) self off to us by standing up on the water and stretching and folding its wings before resuming its gentle paddle. 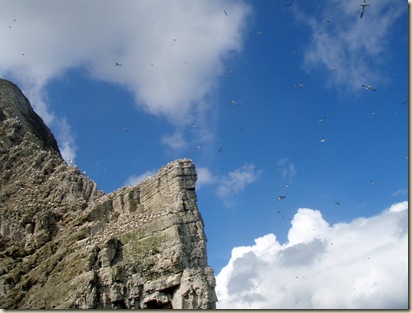 As we paddled nearer to Bempton we saw our first gannets – huge gliders with beautiful white plumage catching the sun contrasting with their dark black wing tips. At the colony itself there were thousands of nesting gannets, it was fascinating watching one of these large birds coming back to its nest improbably stuck to the cliff and occasionally missing its footing and having to go round again! 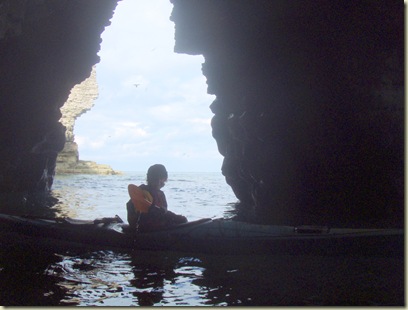 After lunch we explored some of the caves and passages with a very gentle swell occasionally testing our stability!

Thanks to the paddlers – Chris, Judi, Lynette, Mike, Richard and Trevor. 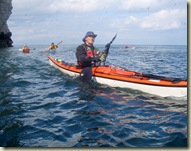 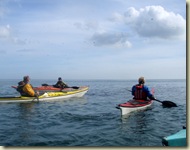