Andy Sutton is a 58 year old paraplegic kayaker with Rutland Canoe Club (RCC). He has a progressing condition that initially reduced his mobility to walking with one stick then two and now he gets around in a wheelchair. Andy started kayaking in 2012 and was RCC’s first disabled kayaker. His condition was found to be worsening in late 2017 and with the prospect of being unable to Kayak within the coming 2-3 year period the seed of an idea to take on one last challenge was hatched.


Andy trained with Pete Dunlop over the winter of 2017/18 on the River Trent and Windermere along with the normal Sunday or Friday paddles with RCC on Rutland Water. Unfortunately Pete was unable to paddle the actual event, so Kevin Spiers, Andy Seager and Steve Winship and John Thomason (Loch Awe leg only) from RCC agreed to step in to look after Andy on the paddle, even to the extent of practicing righting an overturned boat with the paddler still in the cockpit (unbeknownst to Andy). 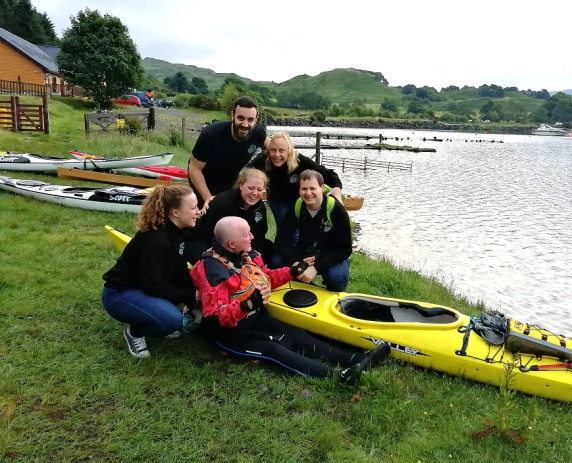 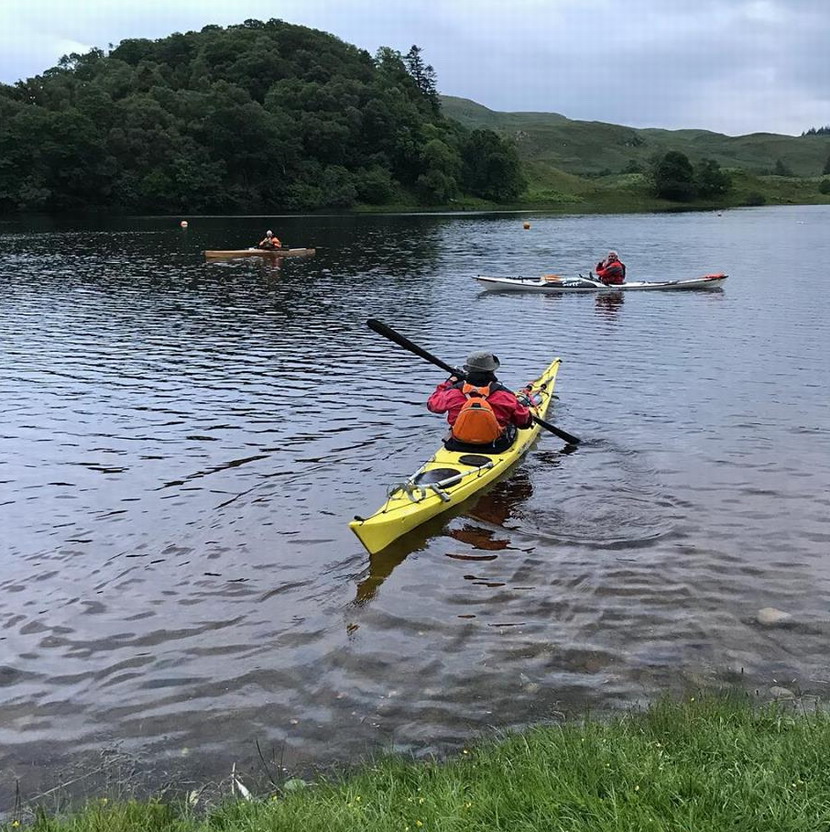 Loch Awe June 16th 05.00
Starting at Torran Bay launching from a gentle grassy slope into shallow water the team left in heavily overcast skies which quickly descended into moderate to light rain for the whole duration with a temperature of 10-12C. With a film crew in tow the team tracked up the east side of Loch Awe to avoid the E to SE wind at 6-10mph cross winds and give Chris Pavey of Growmotion a chance to capture some good footage. 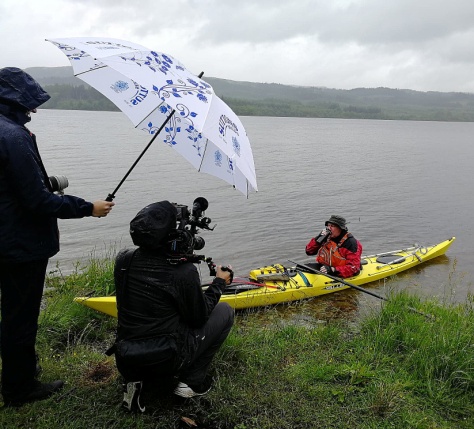 The team had three short stops along the way and made great progress and finished in total time of 6hr 30mins at an average moving speed of 4.1 mph.


Andy was using his homemade Greenland Stick that proved to be the ideal paddle for the long paddles in reducing the pressure on his shoulders, elbows and wrists.


We were blessed with sightings of 9 ospreys, several goosander, curlew and accompanied by low flying swifts and swallows most of the way. 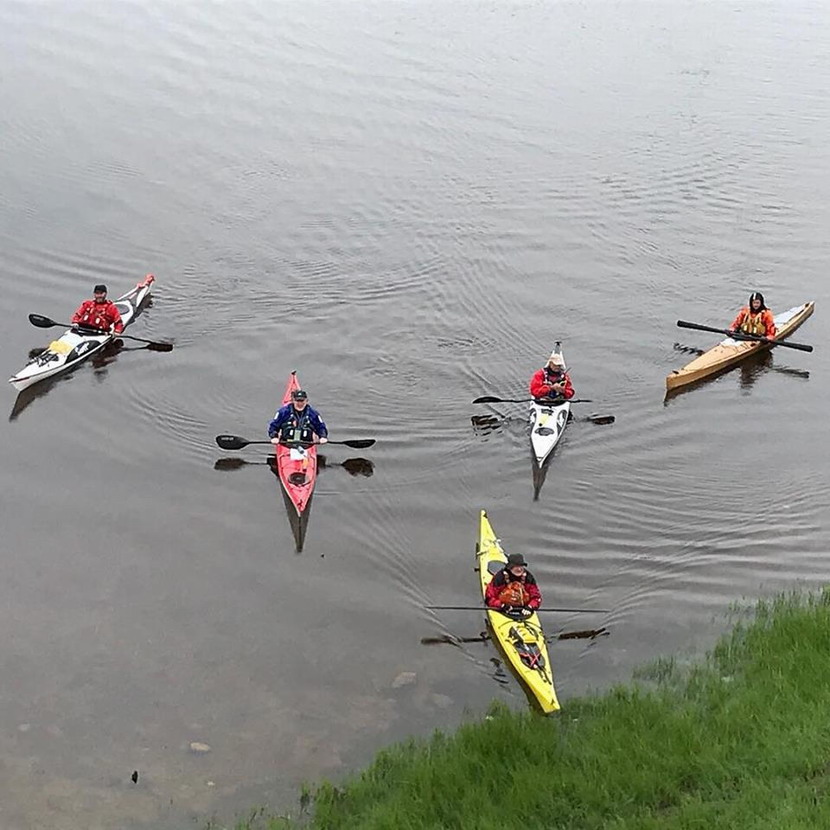 The unloading process at Kilchurn Castle was made difficult by the torrential rain that started just as the team got off the water, along with hauling Andy in his wheelchair along the uneven path back to the cars and avoiding an irate Aussie with car parking issues. 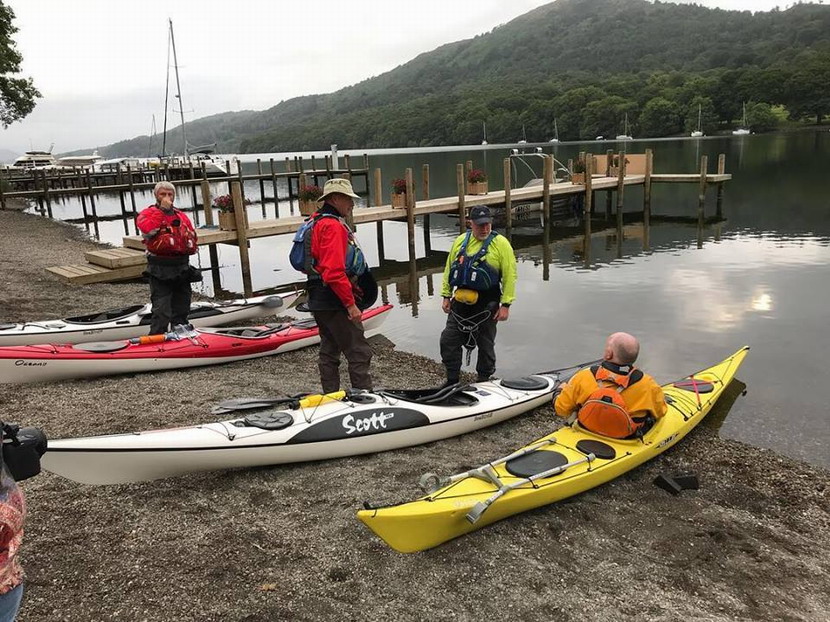 Lake Windermere June 17th 06.00
The team agreed to a slight lie in and a 6am start and got on the water at 05.59 at Newby Bridge end of Lake Windermere with a slightly warmer 12-14C and a light SW wind at 6mph. Andy had some slight stiffness around the upper shoulders/neck from the previous days efforts but nothing to deter the final two legs The team were able to make great progress and with only one very short stop for some drone footage to be shot and a snack, the team got off the water at Ambleside at 08.20 logging a total paddle time of 2hr 21min and an average moving speed of 4.2 mph in better flat conditions. The team stopped for breakfast and refuel before embarking for the final lake. 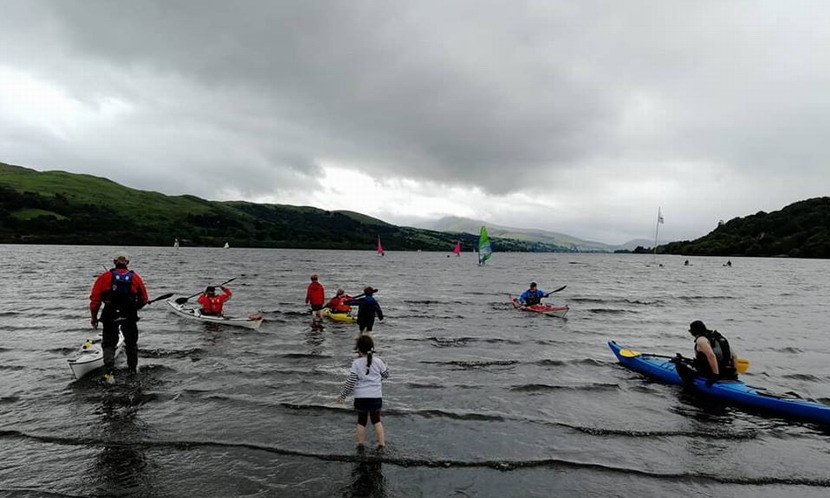 Lyn Tegid (Lake Bala) June 17th 13.30
Arriving at Bala to a stronger SW wind at 14mph and 24mph gusts the team got on the water at 13.30 from a gentle grassy slope in front of the Bala Adventure and Water Sports Centre. They battled the gusty conditions to the far end of the lake, in the knowledge they would have great surfing opportunities for the final push back to the shore. Resting briefly to appreciate the final leg to come the guys headed for home and returned in a final time of 1Hr 56mins and an average moving speed of 3.6mph. 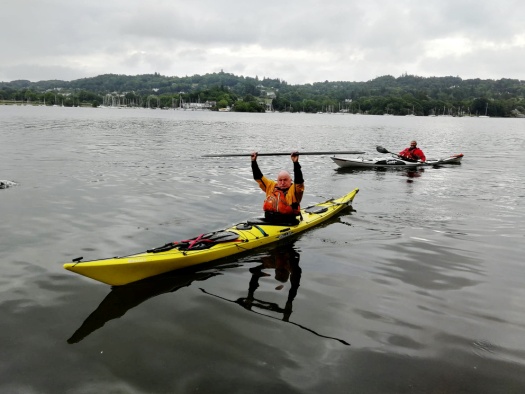 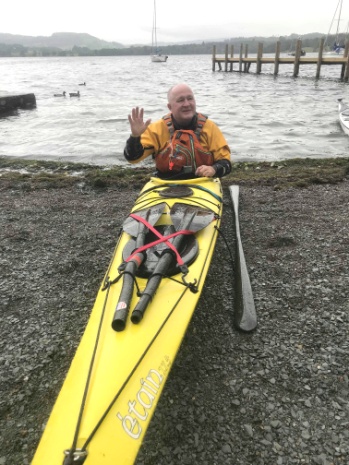 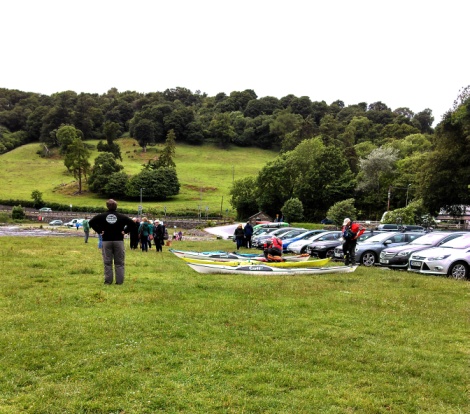 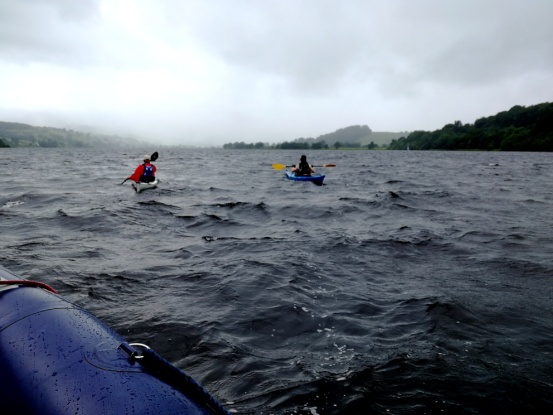 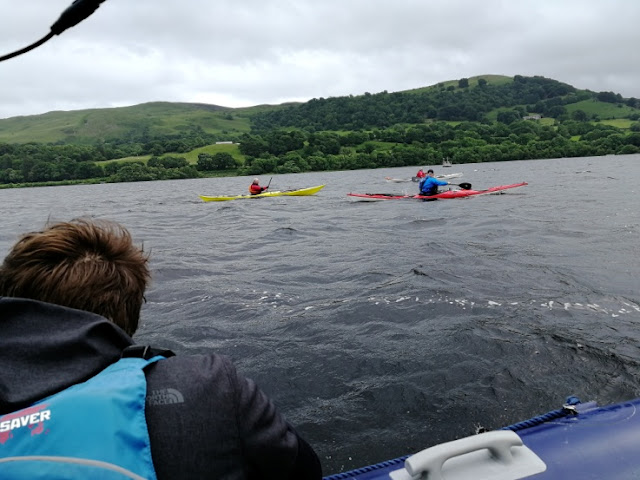 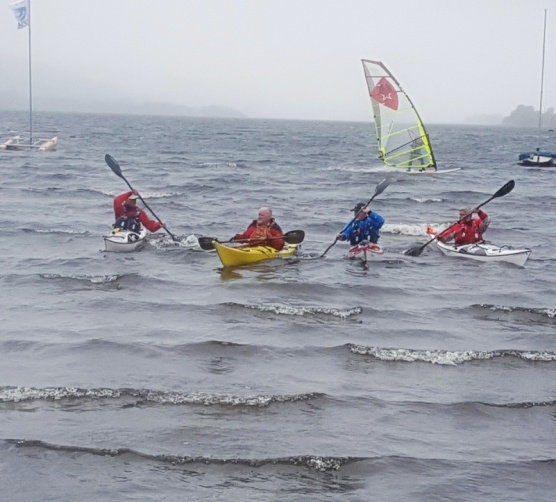 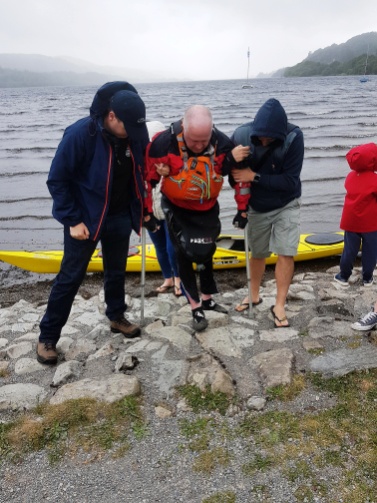 Final figures of a total paddle time of 10hr 45minutes achieved in total time of 34hr 26mins were significantly shorter than Andy’s original predictions of just under 20hrs paddle time and under 40hrs total travel time. Andy has become the first disabled paraplegic paddler to complete the challenge and probably the first to complete it using a Greenland Stick.


"We must say a big thank you to Loch Awe Boats and the Bala Adventure and Water Sports Centre for the use of their boats to allow for some on water filming. Also thank you to British Canoeing for their generous support during the build up and Pete Dunlop through the winter training. A huge thanks must go to Andy Seager, Kevin Spiers and Steve Winship for their wonderful support on all three lakes , to John Thomason on Loch Awe; and especially to Judith, Joy and Suzanne who have all given up annual holiday and their weekend to provide fantastic support both on the road and in the pub; to my family Debbie, Lorna, Abi, Simon and Adam for their unending support and humour; and of course not forgetting grandson Bodhi providing the cute factor all the way through."


"The Challenge is certainly possible for people with disabilities provided you have the back up and support of a good team. I hope this story might inspire other disabled people to take up the sport of kayaking or canoeing. It has given me a freedom of movement and access that I thought had gone forever. I can now get closer to plants and birds and animals that I love so much, than I ever could on crutches and in a wheelchair and with the support of Rutland Canoe Club I have found friends and support that have given me a new lease of life. So my message is Get Out There And Do It – In A Kayak"
- Andy 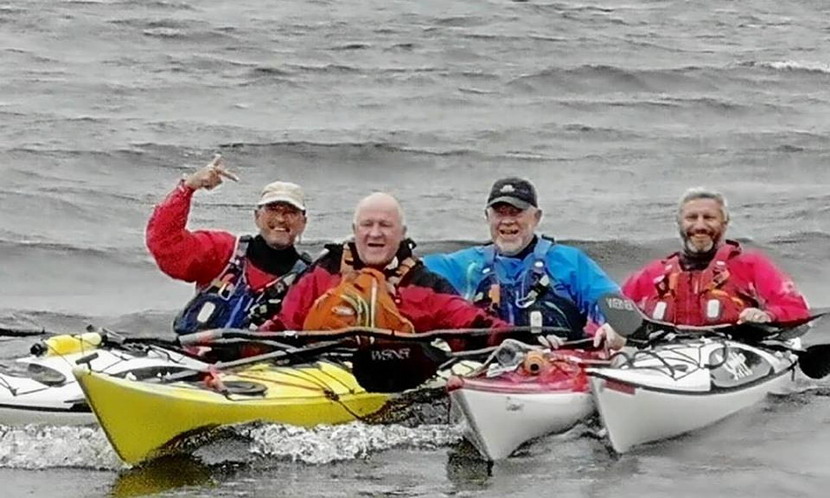 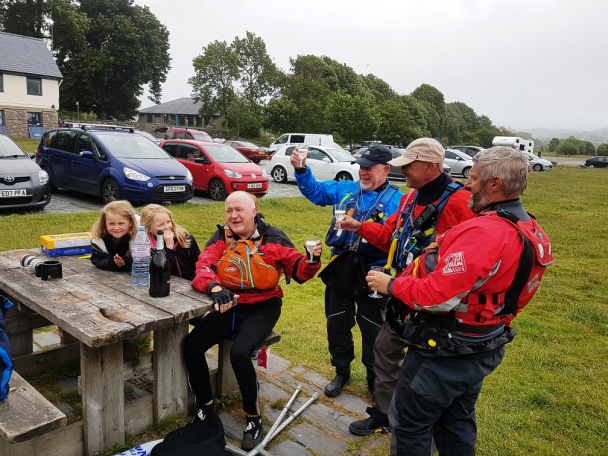 Twenty-one paddlers took part in the race in groups of 3 or 4. A few paddlers even made an attempt at a pirate costume. 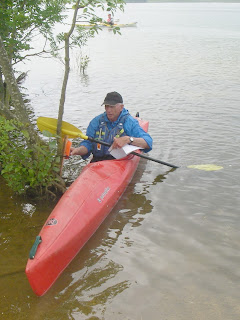 The time limit this year was reduced to one hour and with a total distance of around 8km I didn't expect anyone to visit all the stations. However 2 groups came in under the time.

One group used the advantage of paddling a double by putting one paddler ashore to find the station. There were tales of misbehaviour and competitors being involved in water fights with hand pumps.

We raised a very useful £148 towards Andy's crowd funding campaign | LINK . A shame we did not attract paddlers from other clubs. Most of the money will go towards the Nottingham Children's Hospital Appeal for an MRI unit. Please support if you can.

After the race Kevin led a trip across the lake to Normanton Church via the tower.

In the end the time penalties made the difference between first and second. 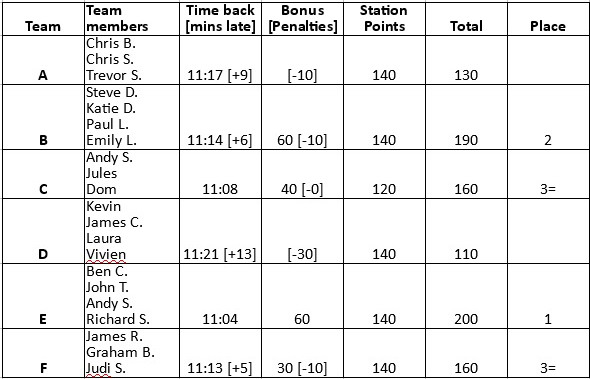 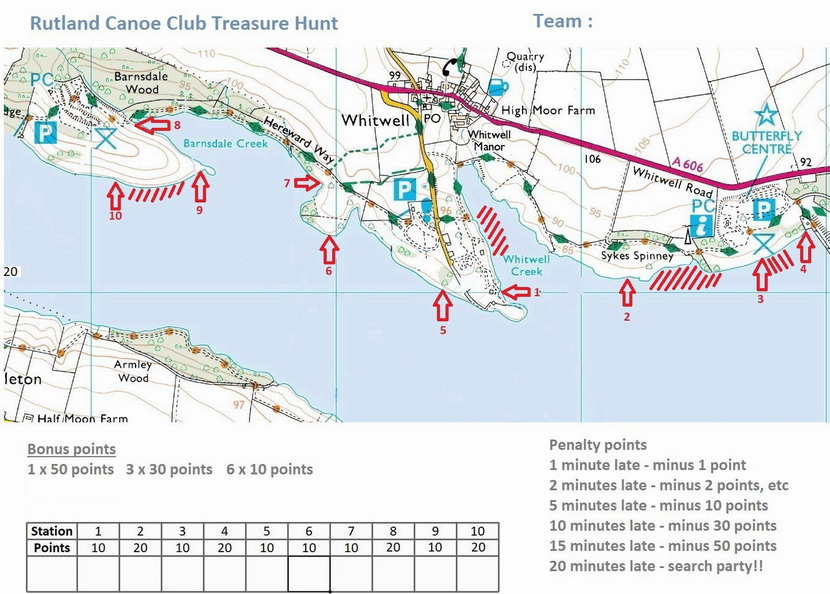 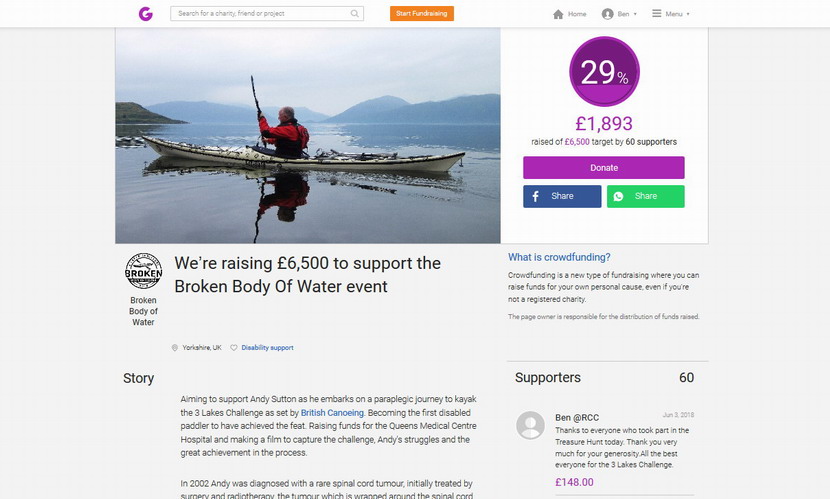 The Treasure Hunt is happening. 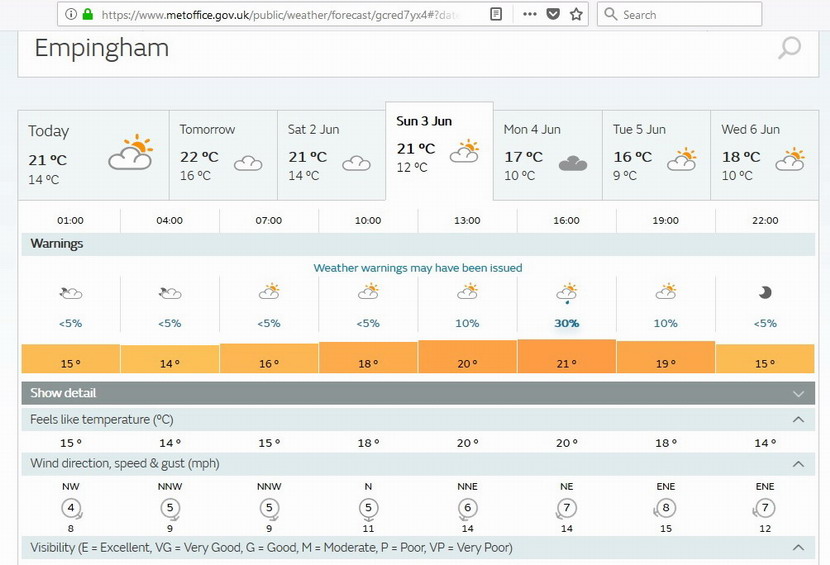 The weather looks settled with light northerly winds but . .. .

I have had no external interest in the event so I'm cancelling the afternoon paddle.

Rutland Canoe Club is running a Treasure Hunt on 3rd June 2018 from our base at Whitwell Creek on Rutland Water.

The treasure hunt is an orienteering type race on the water where you have to visit stations along the shore of Rutland Water within a time limit. At registration you will be given a map showing the location of these stations to plan your route.

Points are gained by visiting as many stations as possible within a set time (2 hours max.). Penalty points if you are late and bonus points for the first team to each station.

Entry level: Groups of 2-4 boats, all paddlers at least BCU 2* standard and including 2 adults (18+).  The group must be able to rescue a member who has capsized and exited their boat and may be asked to demonstrate this. The group must stay together.

Prizes: The trophies are the usual shoddy stuff! The winners must treasure their victory.

Plus, we hope to offer a guided paddle of 2-3 hours in the afternoon, weather and numbers permitting, which will visit the extent of Rutland Water.

All money raised will go to a member's crowdfunding campaign. Andy is paraplegic and is attempting the 3 Lakes Challenge in mid-June while he is still able. The money will go to the Queen's Medical Centre in Nottingham and a motivational/inspirational film of the event.
To donate directly to Andy's expedition: https://www.justgiving.com/crowdfunding/broken-body-of-water

Cost: £18 / person (of which £10 to Anglian Water for access, changing rooms and showers, including £6 car parking)

For non-paddlers: At Whitwell you can swim, sail, cruise, fish, walk, cycle, eat, . .

Any questions and to register your interest in attending please email: treasurehunt@rutlandcanoeclub.org.uk

To enter the Treasure Hunt you should; 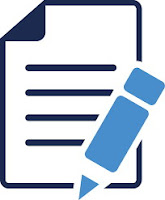